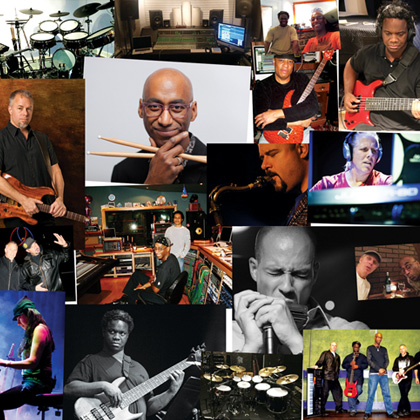 With a long and varied list of credits that reads like a Who’s Who in Rock and Jazz (Weather Report, Miles Davis, Madonna, Sting, Dire Straits, David Bowie, Daft Punk, among countless others), Omar Hakim has long been regarded as one of the elite drummers on the scene. And because his services have been so in-demand since the ‘80s, his own solo projects have been few and far between. He debuted in 1989 with the aptly-named Rhythm Deep and followed up in 2000 with The Groovesmith, both of which showcased his writing-arranging skills along with his irrepressible prowess on the kit. Now, 14 years later, comes Hakim’s crowning achievement to date. A powerful, genre-defying high energy concept album, We Are One boasts an all-star cast including keyboardist Rachel Z (Wayne Shorter, Peter Gabriel, Al Di Meola), guitarists Chieli Minucci (Special EFX) and Jimi Tunnell (Trilateral Commission) along with keyboardist, co-writer and arranger Scott Tibbs, bassist Jerry Brooks, vocalist Angel Rogers and special guests Gregoire Maret on harmonica and Bob Francheschini on tenor sax. For a few songs on the album, Omar also acts as multi-instrumentalist, performing on guitar, keyboards, bass and vocals.

From the epic opener “Transmigration” (which draws favorable comparisons to Return To Forever’s Romantic Warrior or Chick Corea’s To The Stars) to the breezy, catchy pop flavored “Carpe Diem,” the aggressively burning, crunchy metal-jazz of “Walk The Walk,” the ultra-funky “Listen Up!” and the mellow, lyrical title track, Hakim and his crew traverse a myriad of styles on this ambitious outing. And drum aficionados take note: there are plenty of examples of Omar digging deep and slamming with rare authority throughout this powerhouse session. “I used to get a lot of criticism and flak from the fans because they would always say, ‘You don’t play enough drums on your solo records.’ So this time I wanted to make sure I play some serious drums. And I think this project really captured a lot of different aspects of my drumming style on one record — the funk stuff, the rock stuff, the jazzier stuff. It’s kind of all there.”

Fans should be suitably stunned by Omar’s remarkable drumming on “Transmigration,” “Walk the Walk” and particularly “Listen Up!,” which features some of his most ferocious soloing on the record. And yet, this is hardly an album about chops for chops sake. There is a thoughtful undercurrent of meaning that ties these ten tracks together in a thematic way, with the sound of Hakim’s crisp, quick-handed fills and signature beats providing the common ground. “With this record, the idea was to discuss spiritual truths, kind of like Old Age spiritual ideas that are at the basis of every world religion. A lot of religions basically talk about the same thing, just in different languages and in different time periods. But they always get back to the Creator, the Oneness of creation, the fact that we are all connected as a spiritual organism. And so, I wanted to thematically deal, in the song titles for the album, with this idea of spiritual oneness, of spiritual connection with people.”


The Omar Hakim Experience – We Are One